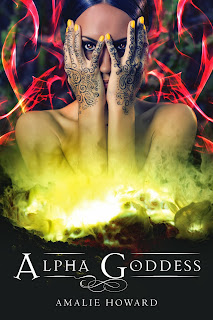 In Serjana Caelum’s world, gods exist. So do goddesses. Sera knows this because she is one of them. A secret long concealed by her parents, Sera is Lakshmi reborn, the human avatar of an immortal Indian goddess rumored to control all the planes of existence. Marked by the sigils of both heaven and hell, Sera’s avatar is meant to bring balance to the mortal world, but all she creates is chaos. A chaos that Azrath, the Asura Lord of Death, hopes to use to unleash hell on earth.

Torn between reconciling her past and present, Sera must figure out how to stop Azrath before the Mortal Realm is destroyed. But trust doesn’t come easy in a world fissured by lies and betrayal. Her best friend Kyle is hiding his own dark secrets, and her mysterious new neighbor, Devendra, seems to know a lot more than he’s telling. Struggling between her opposing halves and her attraction to the boys tied to each of them, Sera must become the goddess she was meant to be, or risk failing, which means sacrificing the world she was born to protect.

Keep reading for a teaser and a chance to win one of three iPad minis!

"Dev grasped her hand and drew it over to him, running his thumb over the mark on her left palm. Sera felt her cheeks redden at his gentle touch. Something electric unfolded inside of her, and her vision tunneled into a memory. This time it was different, though, full of light instead of darkness.

A flutter of firelight from the magical little clay pots lit all around them . . . the discordant aching sounds of a sitar strumming in the background. It was a glorious display, a triumph of good over evil in celebration of their love. His kiss was light upon her cheek, his touch a gossamer caress. She spun in a slow circle, the light on her beloved’s face glowing from within him. She laughed because she was glowing, too."

Amalie Howard also has an upcoming release with HarlequinTeen on October 29th for her brand new series, The Aquarathi, WATERFELL. To celebrate the upcoming release she is hosting an EPIC giveaway! And we mean EPIC. Readers have THREE chances to win an iPad mini! Check out the post here on how you could win: www.AmalieHoward.com

Seventeen Magazine Summer Club author Amalie Howard grew up on a small Caribbean island where she spent most of her childhood with her nose buried in a book or being a tomboy running around barefoot, shimmying up mango trees and dreaming of adventure. 22 countries, surfing with sharks and several tattoos later, she has traded in bungee jumping in China for writing the adventures she imagines instead. She isn’t entirely convinced which takes more guts. She currently resides in New York with her husband and three children.

She is the author of The Aquarathi series from Harlequin TEEN (Waterfell and Oceanborn), The Almost Girl from Strange Chemistry, Alpha Goddess from Sky Pony Press, and Bloodspell from Langdon Street Press. She is represented by the Liza Royce Agency. Visit her at www.amaliehoward.com or on Twitter (@AmalieHoward).